Following the preview of Forett at Bukit Timah over the weekend of July 25-26, Qingjian Realty (South Pacific) Group and Perennial Real Estate Holdings are targeting to launch the project on Aug 8 — the eve of Singapore’s National Day.

Sales will be conducted through a balloting system — but in this case, it will be hosted on Zoom and streamed live on Facebook. Those who have submitted a cheque as an expression of interest ahead of the launch can tune in from anywhere, says Yen Chong, deputy general manager of Qingjian Realty. Qingjian and Perennial are targeting to launch the 633-unit Forett at Bukit Timah on Aug 8 (Photo: Samuel Isaac Chua/EdgeProp Singapore)

“It’s going to be interactive and entertaining,” says Chong. “We will have a prompter to indicate units that have been sold. There will be entertainment by celebrities and special lucky draw prizes  that day.” She will also have a virtual “thinking box”, where buyers whose choice unit has been taken can proceed to consider alternative units. This will allow the queue of hopeful buyers to move along, she adds.

While the launch will be broadcast live from the Forett sales gallery, the property agencies —PropNex Realty, ERA Realty Network, Huttons Asia and SRI — will also be Zooming in from their respective locations, with video clips of the project by the various sales representatives.

The reason for livestreaming from multiple locations is partly due to the Covid-19 safe management measures which limit the number of people who can be physically on site at the Forett sales gallery, Chong explains. While it may pose “logistical challenges”, the virtual launch will be a major coup for Qingjian, perhaps changing the way developers launch their projects. Chong: It’s going to be interactive and entertaining. We will have a prompter to indicate units that have been sold. There will be entertainment by celebrities and special lucky draw prizes that day (Photo: Samuel Isaac Chua/EdgeProp Singapore)

“I really believe [Forett’s launch] will change the way developers sell property in the future,” says Ken Low, managing partner of SRI. “The rest of the industry is watching closely as this is the first major project launch since the circuit breaker was lifted.”

With balloting moving into the virtual realm, potential buyers can Zoom in from the comfort of their homes, instead of having to sit inside a hot tent, waiting for hours and having to use mobile toilets. “It’s ideal for families with elderly folks or young children,” says Low. In the future, developers may not need to build tents for balloting of units too.

Even though new home sales plunged by 58% to 277 units in April, the first month of the circuit breaker, from 660 units in March, they recovered 75% to 484 units in May, the second month of the circuit breaker. Sales were done virtually during these two months as project galleries were closed and property agents were not allowed to conduct viewings in person. Hence, developers and realtors switched to virtual platforms for their marketing efforts, by holding webinars and consumer talks on Zoom. 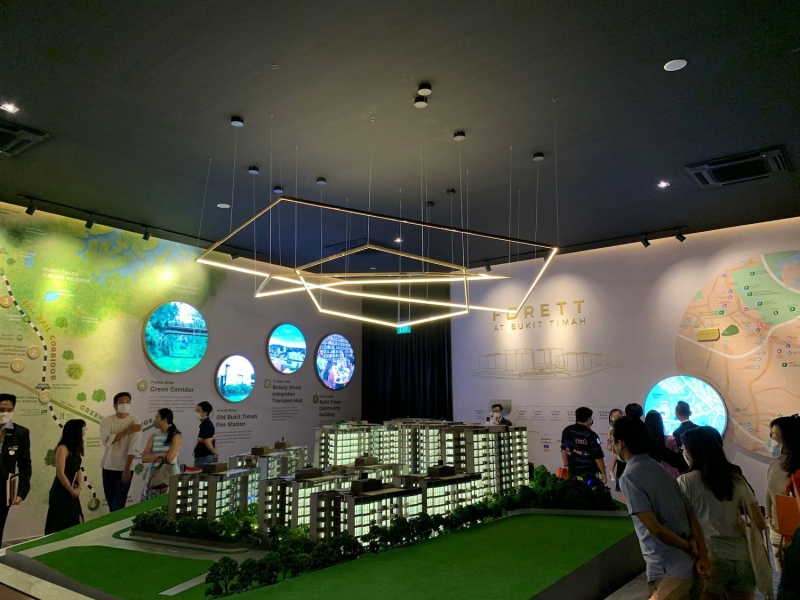 Interested buyers at Forett sales gallery; Qingjian has been engaging potential buyers through its webinars and e-talks (Photo: Qingjian Realty)

“We have been preparing for this [virtual launch of Forett] since the circuit breaker,” says Qingjian’s Chong. “We have been engaging potential buyers through our e-talks or webinars when people were stuck at home. What we have noticed is that even after the circuit breaker has been lifted, more people prefer Zoom meetings over physical meetings.”

According to Ismail Gafoor, CEO of PropNex Realty, doing a virtual launch during this pandemic is a bold step for Qingjian: “While balloting on a virtual platform is entering uncharted territory, the developer is confident as it has already been engaging potential home buyers that way during the circuit breaker. It could well set a new trend for other developers.”

Covid-19 has also made Qingjian rethink the design of the Forett sales gallery. Within the gallery is a multi-sensory “virtual forested walkway”, complete with sounds of nature playing in the background and a scent of the fresh outdoors. “It’s to simulate a walk through the forest, and to remind you of how close to nature you are,” explains Chong. Forett is near the Bukit Timah Nature Reserve, Bukit Batok Nature Reserve and the Rail Corridor. The name “Forett” is derived from forêt, the French word for “forest”. The double “t” denotes “Toh Tuck”, the address of the development, explains Chong. In fact, Forett is a redevelopment of the former Goodluck Garden, a low-rise condominium block built 36 years ago. Qingjian and Perennial Real Estate Holdings had purchased the 210-unit project en bloc in a 60:40 joint venture in 2018 for $610 million. However, the completion of the purchase was delayed for almost a year as some of the minority owners of the former Goodluck Garden had objected to the collective sale. But the developers received the go-ahead for the en bloc purchase to proceed in March last year, after the dissenting owners’ appeal was dismissed by the Court of Appeal.

What drew Qingjian Realty to the site is its location, set within a tranquil, established private housing estate in the Bukit Timah area, says Chong. The original apartment blocks of Goodluck Garden will be torn down, and the 360,143 sq ft, freehold site will make way for a new development with 633 residential units and two shop units. Designed by the internationally-acclaimed architectural firm, P&T Group, Forett will have a series of 13 blocks — nine 5-storey blocks and four 9-storey blocks.

The development will have a wide mix of unit types too. About 62% of the units are a mix of one-bedroom-plus-study units of 474 sq ft to two-bedroom, two-bedroom-plus-study and two-bedroom deluxe units, with sizes ranging from 549 to 764 sq ft. The remaining 38% of the units are three-bedroom, three-bedroom dual-key, four-bedroom premium, as well as four- and five-bedroom suites. These range in size from 947 to 1,884 sq ft. 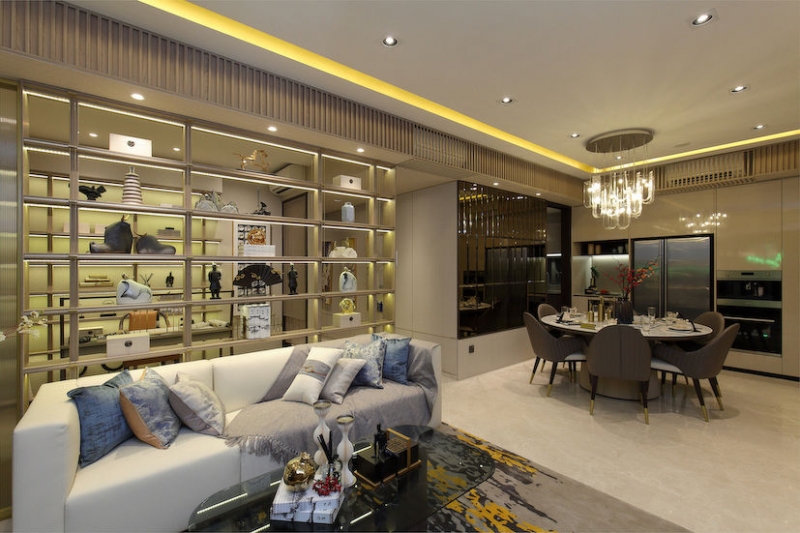 The living and dining area of the four-bedroom suite, where appliances include a warmer and a coffee machine (Photo: Samuel Isaac Chua/EdgeProp Singapore)

Each of the units will come with a balcony that is big enough to work in; and for the four-bedroom units, the balcony will be “big enough to fit three mahjong tables”, says Chong. “During the circuit breaker, a lot of people were working from their balconies at home. The greenery also makes a nice background for their video conferencing calls. This was a real game-changer.”

As the site is undulating, Ecoplan Asia, the appointed landscape architectural firm for Forett, is able to design the landscaping around the theme of the four seasons — winter, spring, summer and fall. “In Singapore, we don’t have four seasons, of course, but we are going to have different flowers of different colours that will bloom at different times of the year to reflect the different seasons,” says Chong. 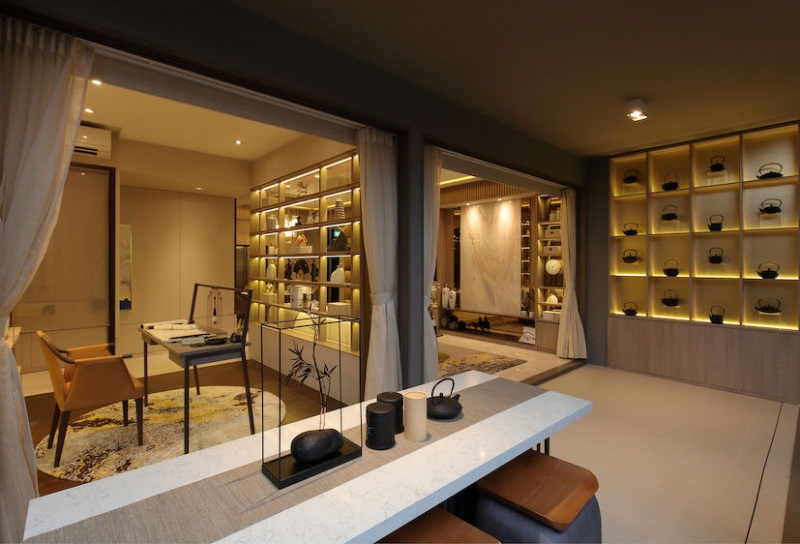 As part of an effort to retain a piece of Goodluck Garden’s history, the developer is conserving a 120m long, ivy-covered wall. Forett will also have a long driveway, with landscaping on either side, very much like the entrance to a grand mansion, adds Chong.

One of the draws of the development is its low density, given the huge site area of more than 360,000 sq ft, notes SRI’s Low. The developer has also provided generous facilities: beyond a main swimming pool of 50m, there are also three 30m lap pools, and at least two clubhouses and lounges, a well-equipped gym as well as a theatrette.

One of the clubhouses will also be designed as a conservatory surrounded by the greenery. The interior will resemble a café with comfortable seating areas, so residents can work from there, relax with friends and family or just enjoy a cup of coffee, says Chong. The seating area of Forett’s sales gallery has been designed to reflect the mood of the future clubhouse. “People still enjoy the café-interior style,” she adds. 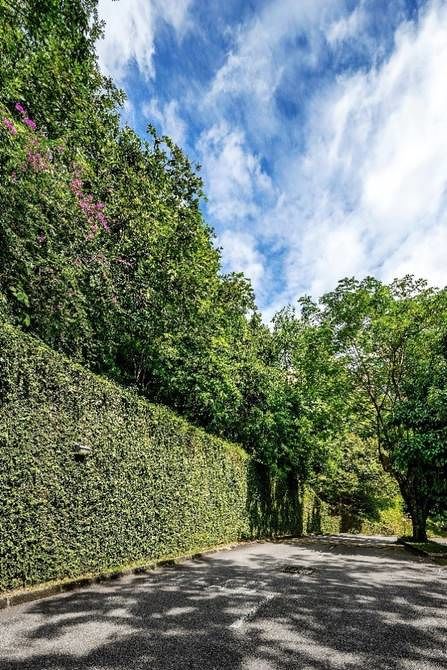 As part of an effort to retain a piece of Goodluck Garden’s history, the developer is conserving a 120m long, ivy-covered wall (Photo: Qingjian Realty)

All the units at Forett will be designed with marble flooring for the living and dining area, and real timber flooring for the bedrooms. The bathrooms will be fitted with top-end sanitaryware from Swiss brand Laufen and Italian brand Gessi. The four- and five-bedroom units will come with private lift lobbies. In addition to the standard stove hob and oven, the kitchens of the four- and five-bedroom units will be fitted with a food warmer and a coffee machine.

The 93 two-bedroom deluxe units will come with high ceilings of up to 4.6m. This allows the owners to build a furniture deck if they want, adds Chong. The units come with an enclosed kitchen too, which is unusual for most two-bedroom units, she adds.

Chong believes that in the Toh Tuck area, given that it is an established landed housing estate, there are residents who have lived there for 20 to 30 years. They are likely to buy units for their grown-up children so that they can live near them, she adds. 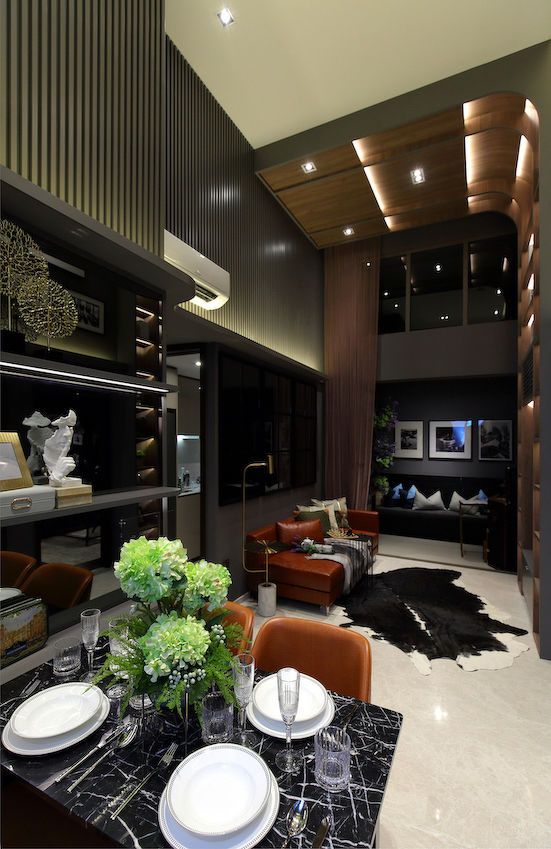 Some could also be looking for an investment property that they can move into if they want to downsize in the future. “That’s why we are providing a wide range of two-bedroom units, which appeal to investors, as well as singles and couples,” adds Chong. “This is a freehold development in prime District 21.”

Across the road is the 327-unit Daintree Residence by Malaysian developer SP Setia. The 99-year leasehold development was launched in July 2018 and has seen a resurgence in sales since Phase Two of reopening. As at July 27, 182 units in the development have been taken up at an average price of $1,670 psf. This means that the project is 56% sold to date.

Adjacent to Daintree Residence and fronting Lorong Kismis is the 186-unit, 99-year leasehold, View at Kismis, a condominium project by listed property developer Roxy-Pacific Holdings and the privately held TE2 Development, which is part of the Teo family of Tong Eng Group. Launched last July, 103 units have been sold at an average of $1,693 psf, which translates to a take-up rate of over 55%. 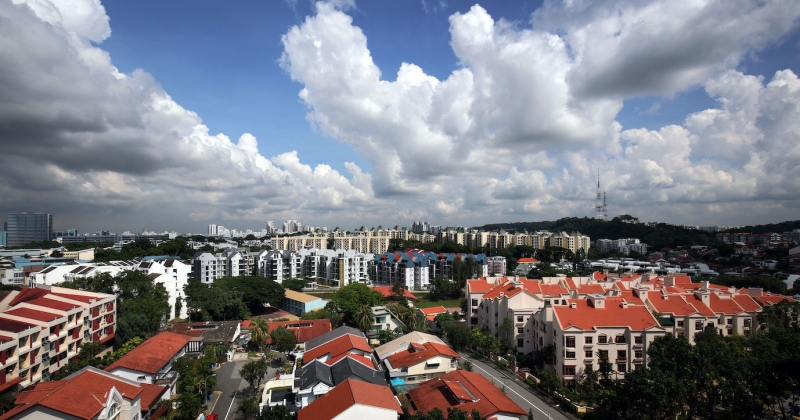 Meanwhile, PropNex’s Gafoor says the challenge is scheduling appointments for interested buyers who want to view Forett’s physical sales gallery and showflats, due to the safe management measures. “We have collected 300 cheques as expressions of interest so far, but we can schedule only 30 appointments a day at most,” he laments.

‘We found Matthew’s Advertisement in the newspapers for a landed terrace house at Changi Cove. It was a very grand property but unfortunately as we were not decisive enough, it was sold. We tried giving a higher offer but Matthew was professional not to reveal the offer of others.

Two weeks later, we received a call from Matthew and he invited us to view another beautiful property near to the first. Matt...Read More

It was such a pleasure working with Matthew who seemed to have all answers to our real estate questions. I would highly recommend him and his support team who made our transaction all so easy and painless. Thank you, Matthew.

Matthew have been helping me with my estate transactions for over a decade, he is the perfect example of what you should get when you think of Realtor. He is always on time, prepared, honest and look out for our best interests. Communication is always quick and detailed. Through every step of each negotiation he is a step ahead and he make it look easy. I have listed and purchased multiple homes with Matthew an...Read More